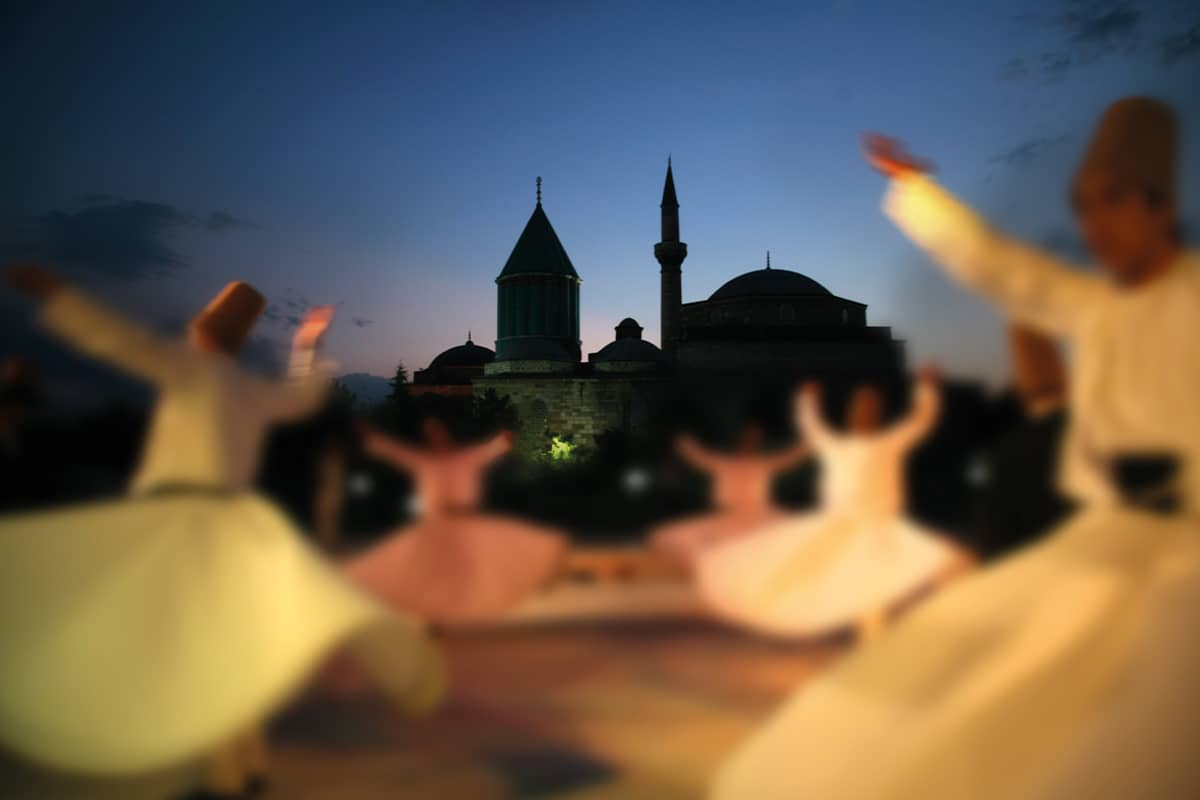 As Les Arts Turcs team we can offer some services for Whirling Dervishes Ceremonies and Tours.
Please contact us
info@lesartsturcs.com
www.lesartsturcs.com

Every 17 December, the night of Mevlana’s death, thousands of people from all around the world gather at the magnificient 13th century Mevlana Mausoleum to celebrate Seb-i Arus, his ‘Wedding Day’, his reunion with his Beloved, with the Divine. During his last hours his wife pleaded with Mevlana to not leave and ask God to let him stay here a little longer. Mevlana’s reply was thus:

Have I stolen someone’s goods?

Is this why you would confine me here and keep me from being rejoined with my Love?

So we see his opinion of death. It is the time of release from this cage of the body; the time when the bird of the soul flies free. But it is thus for the soul which has realized the Divine within and has become purified of all earthly desires. For those on the path of Mevlana, Seb-i Arus is a celebration, like a festival of the beauties being offered every moment to the Lovers of God. According to Mevlana’s teachings, human beings are born twice, once of their mothers and the second time of their own bodies. The real birth is the second, spiritual birth. Mevlevi dervishes, guided by a spiritual leader, are expected to live as members of the Mevlevi Order, according to the principles of his teaching. A long period of spiritual progress is necessary before they can participate in the whirling dance, for which they wear a tall cap symbolizing the tomb of carnality, and a white robe which is its shroud.

Those who live this celebration every year and also those experiencing it for the first time, were given at least a taste of the beauties and wonders of loving God, of wanting to be with God eternally.

Held annually to commemorate Rûmî, a 13th-century Sufi scholar known all over the world, the ceremonies traditionally have an air of celebration as he considered death as the way to unite with “the Beloved” – God in Sufist terminology. In fact, the ceremonies bear the name Şeb-i Arûs which means the night of reunion for this sake.

This year, the commemoration ceremonies starts on December 7 and will be in progress until December 17, featuring several activities that have become part of the tradition, the most usual being the Semah ceremony, the famous ritual of the whirling dervishes (semazens).

Local and foreign visitors plan to arrive in the Central Anatolian city for this occasion every year to attend the events, like symposiums, concerts, exhibitions, and workshops taking place in the heart of Konya. The head of the Islamic Sufism Music Association, Fahri Özçakıl actually recently informed a national newspaper that a total of 49 artists, including the guest performers, are welcoming visitors this year.

Sema Ayin-i Şerifi
What is known as Semah ceremony in the west is also referred to as Sema Ayin-i Şerifi, and it sees whirling dervishes perform the traditional dance to the accompaniment of Sufi music, usually featuring ney (reed) players. Traditionally begun with a praise of the Islamic prophet Mohammad, the dance is laden with meaningful moves and details to inspire everypne. The red post on the Sheikh, for example, symbolises the sunset and thus the coming of the day Mevlânâ would be reunited with God.

The semazen starts the dance with his arms standing across his chest and then takes off his waistcoat, a symbolic move that connotes purification. A round floor is the usual setting for the ceremony and it represents the universe. The semazen then slowly opens both arms to his sides to embrace the universe. The ritual is then continued with the right hand extending upward and the left, downward. This means receiving from God, letting the blessings flow through the heart to be finally distributed among all companions on earth. The same move has been also interpreted as a symbol for a human’s life on earth – meaning we come from the heavens and end up turning to the soil.

With faith possessed and expressed in perhaps the most structured manner, these ceremonies compose a complex yet exquisite event to attend for those who are keen on spiritualism.

Mevlânâ Celâleddîn Rumî
Rumî is a significant figure whose influence has persisted in all parts of the world, befitting a philosopher that embraces all religions, cultures, and people and whose writings have been considered a pinnacle of Islamic literature.

The Sufist poet lived most of his life in the Central Anatolian city of Konya. Known today for his six-volume poem Mesnevi, a cornerstone of Islamic literature where most of his teachings are compiled, he believed that to die was to be released from the cage we call a body, and thus finding the utmost happiness, which differs from the temporary happiness one could feel on earth. It is for this reason that Şeb-i Arus is not necessarily a week of mourning but of celebration.

Though his memory is revived through several legacies, it is his teachings that compose the ultimate legacy, with the most famous being his seven advices:

In generosity and helping others be like the river.
In compassion and grace be like the sun.
In concealing others’ faults be like the night.
In anger and fury be like the dead.
In modesty and humility be like the earth.
In tolerance be like the sea.
Either exist as you are or be as you look.
A solemn event, the 10-day Şeb-i Arûs ceremony attracts more and more visitors each year, which marks an important development considering the mystic’s timeless quote: “Come, whoever you are.”

Whoever they are, visitors usually flock to the usual attractions of Mevlânâ Museum, the Tomb of Shams Tabrizi, and Mevlânâ Cultural Centre, all located in Konya and other dergâhs (Mevlevi lodges) across Anatolia.

A foundational event for the city, Şeb-i Arûs is usually celebrated in Konya. The city’s famous landmark Mevlânâ Museum is where the 13th-century mystic and his companions are buried, and it stands on the lands Rumî once frequented. For visitors to the Şeb-i Arûs ceremony it composes a sight not to be missed.

With its famous Kubbe-i Hadra, which can be literally translated as the green dome, the shrine of Rumî composes a milestone that attracts hundreds of visitors not only during these 10 days which are full of contemplation but all year-round. Composed of two main buildings that were erected around a unique, stunning courtyard, the museum is a UNESCO-recognised foundation, safeguarding the teachings of Mevlânâ.

You may want to visit Go Konya to learn more about the city of the whirling dervishes.

The Tomb of Shams Tabrizi
Sources tend to have different opinions on who Shams Tabrizi was. Some argue he was Rumî’s student whereas others do assert it was the other way round. What we know for certain is that they spent a certain time contemplating about religion and that Mevlânâ valued him so much that he dedicated an ecstatic poetry book to him.

Today, the Tomb of Shams Tabrizi situated 10 minutes from Mevlânâ Museum, and the visitors to the Şeb-i Arûs events change their route towards it alongside the museum. The events of 2021 started, for example, with a visit to this tomb, organised by the Provincial Directorate of Culture and Tourism of Konya.

The Sema Ayin-i Şerifi and several other events are performed every evening between Dec. 7 and Dec. 17 2021 at this cultural centre. Located only a kilometre from Mevlânâ Museum, the centre hosts congresses, fairs, and exhibitions throughout the year, though it is spared for the annual commemoration events between these dates.

Dergâhs
There are several Turkish dergâhs (Mevlevi lodges) that do deserve your visit. Depending on your route, you could customise for yourselves a journey full of peace and contemplation by paying a visit to these places.

One lodge that is more commonly known is Galata Mevlevihanesi (Mevlevi Lodge of Galata), located in İstanbul’s Galata quarter.

This year, the Şeb-i Arûs ceremonies here will be held on Dec. 16 at 5pm, with the contributions of the Turkish Ministry of Culture and Tourism and the Municipality of Beyoğlu.

UNESCO Influence
The Semah ceremony managed to carve itself a place in UNESCO’s Representative List of the Intangible Cultural Heritage in 2010, which has added to the tradition’s popularity.