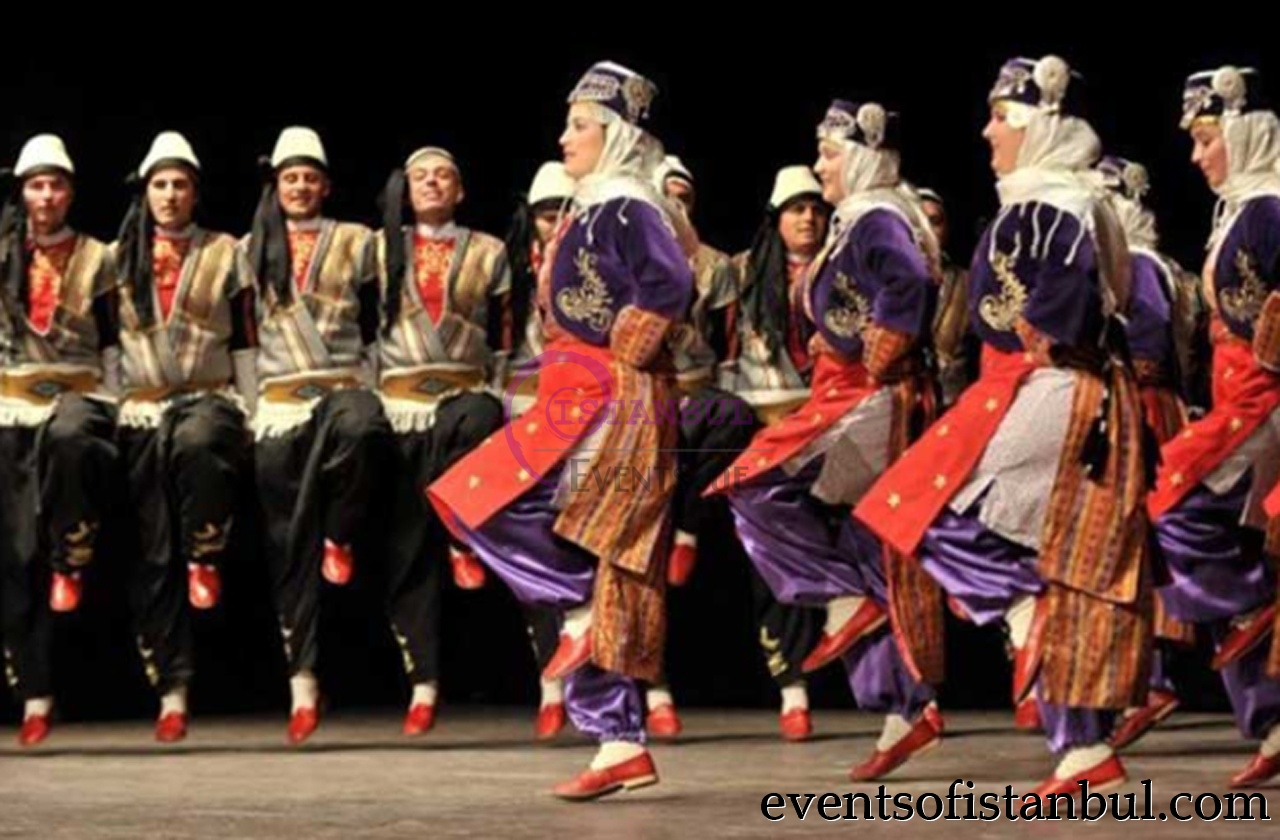 Turkish folk dances; It is one of the important components of Turkish folklore. It is a science that examines the regional dance and local dances and costumes played in villages and towns.

Turkish folk dances have not been completed yet. However, studies are continuing. Each village has its own dance and economic conditions make it difficult. Turkey, with over 4000 dance determined in the villages are defined as countries with the richest dance characters in the world. Because that is the cradle of culture and civilization in Turkey, almost every region in separate dance, have been found to separate clothes and music separately.

Folk dances; In contrast to other branches of art, it is a cultural identity that carries the original characters of the society to which it belongs, exhibiting the collective emotion thoughts and behaviors of individuals, which is capable of illuminating the world of only the beautiful, but interested ones.

Folk dance is an important factor in the physical and spiritual development of the individual with its sense of brotherhood, melody, rhythm and movement structure. The advantage of the person cohesion of playing together, together, move, share and Folk Dance teaches self-expression starting from these features, the activities to be implemented individual development of people in Turkey are contributing to the well provided, as well as social development. Folk dances and folk dances should not be confused with each other. Because folk dances are merely dances that reflect our culture zeybek, horon, hora, welcome etc. Folk dances are often played at meetings such as peasants, insignia, conscription, descent and descent, birth, religious and national holidays, and the victory, ferfene, barana, queue, and chat.

Dance are usually played in closed places as played in open spaces suitable for playing dance.

Especially in weddings, people who are known to play well in the region are invited. Because at the beginning of the community the local music and dance are well-known and respected people. Folk Dances owed their wealth of figures to these people. They make their own improvised figures to show their mastery of dexterity. Thus, people who play or do not play, especially young people have been shown and transferred.

Folk dances played in Anatolia are classified according to their types

Turkish dance regions: Hora – East Thrace Zeybek – Aegean, Southern Marmara and Middle-eastern Anatolia Region Teke – Western Mediterranean Region Kaşık Havası and Karşılama – Western Central Anatolia, Western Black Sea, Southern Marmara, Eastern Mediterranean Region Horon – Central and Eastern Black Sea Region Halay – Eastern Anatolia and Central Anatolia Region Bar and Lezginka – Northeastern Anatolia Region Bar With their structure and formation, they are the dances performed groups in the open. They are spread, in general, over the eastern part of Anatolia (Erzurum, Bayburt, Agri, Kars, Artvin and Erzincan provinces). The characteristic of their formation is that they are performed side-by-side, hand, shoulder and arm-in-arm. Woman and man bars are different from one another. The principal instruments of our bar dances are davul and zurna (shrill pipe). Later, clarinet has been added to the woman bars. The dominant measures in bars are 5/8 and 9/8. Occasionally measures of 6/8 and 12/8 are used. Aksak 9/8 measures which are also the most characteristic measures, in particular, of the Turkish folk music are applied with extremely different and interesting structures in this dance. They normally wear costumes as they dance. They always dance with pride and they turn their hands as they hop dance.

Halay This folk-dance, is a part of Turkish dance and is performed to a large extent in the Eastern, South- Eastern and Central Anatolia and it is one of the most striking dance. It has a rich figure structure of simplicity is the symbol of creation and originality of the folk. The rhythmic elements of halay dances are very rich and are mostly performed with drum-zurna combination as well as with kaval (shepherd’s pipe), sipsi (reed), cigirtma (fife) or baglama (an instrument with three double strings played with a plectrum) or performed when folk songs are sung.

Horon, is a dance style found in the Black Sea region, now modern Turkey. The dances called Horon derived from the Greek culture of the area and are circular in nature, each characterized distinct short steps. HORON or the round dance is a typical folk dance of the Black Sea coastal area and its interior parts. Horons appear very different from the folk dances in other parts of the country with their formation of tempo, rhythm and measure. Horons are performed, in general, groups and their characteristic measure is 7/16 For their melodies are rendered very fast, it is very difficult to render them with every instrument. For this reason, rendering with a drum and zurna becomes practical. Melodies of horon are performed with the small type of zurna which is called ‘cura’. In addition, in the interior parts blowing instruments such as bagpipe mey (again, a small zurna) etc. The other measures used are 2/4, 5/8 and 9/16.

Zeybek Zeybeks are, in general, the widespread folk dances of the Western Anatolia. It is rendered one person or two or a group of people and its name changes for example as ‘seymen’ in the central parts of Anatolia. Zeybek dances are formed, in general, of 9/8 measures and have a variety of tempos such as very slow, slow, fast and very fast. Very slow zeybek dances have the measure of 9/2, slow ones 9/4 and some others 9/8. Very fast dances, for instance, teke (goat) dance seen in Burdur – Fethiye region can be regarded as dances of zeybek character, they have the traditional measure of 9/16 There is another folk dance named as BENGI in the zeybek region. It is performed more differently from the zeybek and has got a different musical feature and the most characteristic measure of bengi dance is 9/8. Particularly in slow zeybeks, the traditional instruments is drum- zurna combination. The use of 2 drums and 2 zurnas in combination is a tradition, function of one of the zurnas is accompaniment, in other words, it accompanies the melody with a second constant tune. Apart from drum-zurna, a three-double string instrument baglama, reed, marrow bow etc. are used for fast zeybek dances. In particular, the traditional instrument of the teke dance region is reed.

Karsilamas A kind of wedding music and hora type folk dances with melodic and rhythmic structure and with a fast performance facing one another and different cultural structure of the region and the dominant measure is 9/8 but some other measures are used as well. Their traditional instrument are 2 drum – 2 zurna combination, the most characteristic use of this combination is seen in this region. It can be found also as, Tsifteteli. Kasap havasi Meaning “the butcher’s dance” from Turkmen: kasap “butcher”, is a modern dance from İstanbul and East Thrace. The dance has its origins in Byzantine times butchers, taken the Byzantine military. Kasık Oyunları (Wooden spoon dances) These dances, in general, are mostly spread over the Mediterranean region and have a very different structure with their arrangement performance, rhythmic and melodic characteristics. They are always rendered with wooden- spoons and the characteristic measure is 2/4 or 4/4. The instruments used are beast bow (later violin), baglama and clarinet, in general, they are accompanied folk songs. Dinar is probably the best known of the “wooden spoon dKolbastı: Kolbastı is among teens in common and widespread. Lezginka Lezginka is mainly performed in Kars and Ardahan. Samah: Samah melodies have the measures of 5/8, 7/8 and 9/8. Their traditional instruments are baglama, bow etc. There is no rhythmic instrument. Performance singing (without any instrument) is also widespread. The most developed samahs are of 3 parts, namely: a) agirlama (entertainment b) yeldirme (cloak wearing) c) kogdurma (dismissing). and can be found mostly at the region of Pontus. Shiksaray Turkish dance, with origins in Black Sea Region.