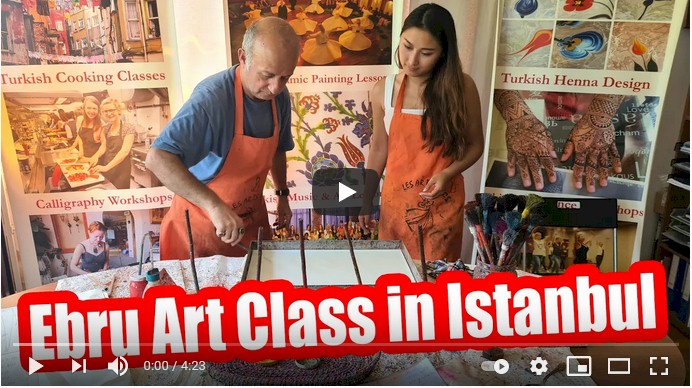 THE TURKISH ART OF MARBLING (EBRU)

Marbling is the art of creating colorful patterns by sprinkling and brushing color pigments on a pan of oily water and then transforming this pattern to paper. The special tools of the trade are brushes of horsehair bound to straight rose twigs, a deep tray made of unknotted pinewood, natural earth pigments, cattle gall and tragacanth. It is believed to be invented in the thirteenth century Turkistan. This decorative art then spread to China, India and Persia and Anatolia. Seljuk and Ottoman calligraphers and artists used marbling to decorate books, imperial decrees, official correspondence and documents. New forms and techniques were perfected in the process and Turkey remained the center of marbling for many centuries. Up until the 1920’s, marblers had workshops in the Beyazit district of Istanbul, creating for both the local and European market, where it is known as Turkish marble paper.

The Art of Marbling

Talik calligraphy done on lightly marbled paper, decorated with sand marbling in the inner border and oversized marbling around the exterior.

Following its acceptance of the Islamic faith, the Turkish nation so bound itself to that religion that there was not another on earth which had so devoted its blood in the name of God.

Becoming on the one hand the Sword of Islam and conquering countries in God’s name, at the same time, it dedicated nearly all its art to the most beautiful expression of the pine; for the most part in its music, in its architecture, in its calligraphy, and in its decorative arts, the Turkish nation dealt with that which was mystical. Indeed, quite a few branches of the arts were developed in religious lodges, yet out of the humbleness afforded by dervish training no signatures are to be seen below them.

Just as in the case of the development of the art of Turkish architecture, where the primary element was the architecture of the mosque and this art gave life to a great number of other branches of the arts such as tile making, marble working, glass making, wood carving, and mother of pearl inlaying, so too did the Turks accept the Arabic alphabet (which gained importance with the Koran) as another main branch of the arts, and they developed six separate styles.

Together with these six styles of writing developed under the heading of the art of calligraphy, holy verses and traditions were worked into all media from paper to cardboard, and from large cloth panels to marble, wood, tile, and metal. Decorators framed these writings with beautiful figures, gilders gilded them, decorated them, adorned them. It was in this way that subsidiary branches of art arose which embellished the art of calligraphy, and at the head of these come the arts of, illumination, ornamentation, marbling, and bookbinding.