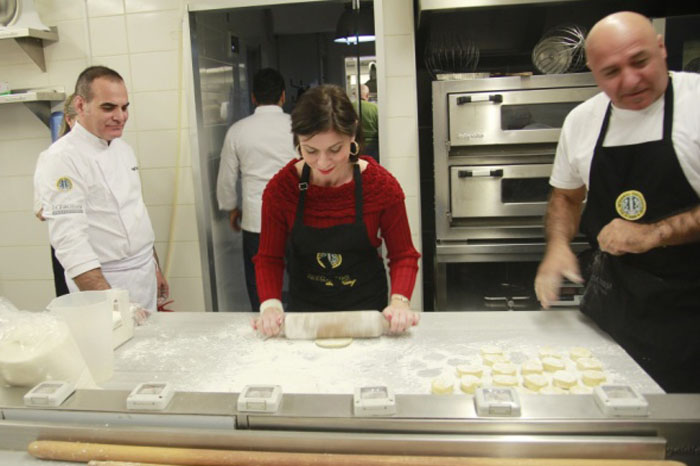 What is baklava?
Before even discussing its history, it should be made clear what baklava is. This dessert is prepared with layers of thin dough called “yufka”, similar to phyllo, that are layered on top of each other. Different fillings are used, although the most common is crushed pistachios. With melted butter drizzled all over, the dish is then baked and drenched in syrup.

This would be the most basic and iconic of all the types of baklava, but indeed there are many others with different fillings, such as walnuts, hazelnuts or a combination of nuts. Baklava can be cut into different shapes and sizes and even be rolled. Some can have a cream filling and be made with milk, as well.

The origins
The many layered baklava we know today was developed in the kitchens of the Topkapı Palace and was baked after the conquest of Constantinople. While kitchen notebooks with the recipe have been dated to around 1473, the origins of the dessert date much further back.

Probably one of the earliest mentions of a dessert resembling baklava comes from the Assyrian Empire in the 8th century BCE. According to Franz Maier, the dessert was described as “layering unleavened flat bread with chopped nuts and honey”.

The first Turks to enter Anatolia were nomadic, hence the baking of bread in a stationary oven was just not feasible. In the 11th century it is mentioned in writing, that they found the best way to bake dough for them was to roll or stretch it as thin as possible and cook it over a fire. It is also only human to grow weary of eating the same food over and over again, so innovations were made to get more sweet combinations on the table as well (6).

One precursor that can be marked as the link of the first Turks in Anatolia is “Baki pakhlavası”, or Baku baklava, which was made of eight sheets of dough with nuts in between each layer (1).

So how come that the Greeks claim this dessert for their own? Professor Speros Vryonis said explains that a dessert called “koptaon” or “kopte” resembled baklava. American journalist Charles Perry, on the other hand, claims that the cited evidence is not enough to support this. He says the Byzantine dessert mentioned was indeed layered, but did not have any kind of dough, making it a confection rather than a pastry like baklava. (1)

Further evidence is another early recipe of baklava found in an Arabic cook book from the 13th century by the name of Kitab al-Wusla ila al-Habib, where the dessert has both an Arabic and Turkish name (4). Further evidence to baklava’s Turkish origin is the dish “tutmaç” which is layered just like baklava but evolved into a savory dish over the centuries still enjoyed today. (5).

One last note to make here is that the Turks have made a small but significant victory in claiming the dessert as their own: In 2013 the EU awarded the famous Gaziantep Baklava the “protected status”, becoming the 16th non-EU food to receive the status.