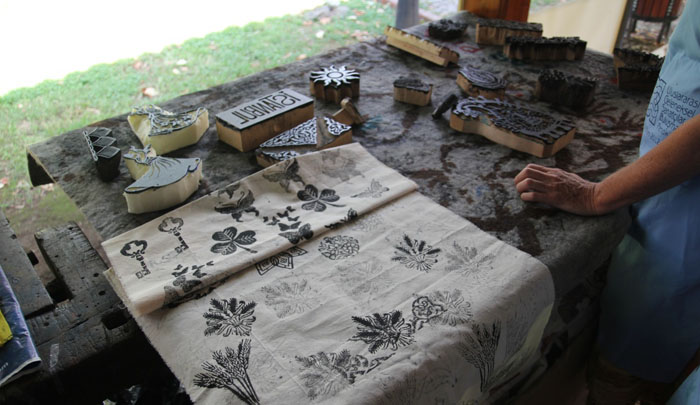 However, the final word has not yet been said on the subject of woodworks in Turkish art.

We unexpectedly face with beautiful columns worked in detail, stalactitical pillar heads, pulpits, ceilings, planks in Turkish architecture and with Koran cases, reading desks and consoles made of wood.

Furthermore, we can find the most beautiful examples of this work in the present day antiques shops, museums and private collections.

The Techniques Applied in Woodworks

In the method of carving, a pointed chisel works out the decoration in raised form carving the surface of the wood. In this method, there is deep carving and slanting carving.

There is no ground in this technique, but various compositions carved in the from of palmettes, lotus leaves and spiral leaves.

The carving method used the Seljuks have been replaced dovetail works of the Ottomans. This work is done attaching small geometrical pieces morticing and tenoning. Since the veins of the pieces come crosswise in this method, no deviations and deformities occur due to humidity and heat, and the works preserve their proper appearance over centuries.

Various wood works unearthed in the Central Asian tumuli and Pazyryk excavations, have revealed that Turks were interested in this subject since ancient times. In Islamic art and especially in Omayyad and Abbasid wood works, we find a tendency towards a new style. The Syrian and Egyptian stone reliefs of the 10th-13th centuries had influenced the Fatimid wood works and decorations of acanthus and vine leaves peculiar to Syrian region were widely used. For example, the stone reliefs on the front of the Meshatta Palace was revived with nuances in the Omayyad and Abbasid works, was a favourite decoration of this period. The most famous example of Omayyad wood works is the multi-pieced pulpit of the Kayravan Mosque made in the 11th century and presently kept in the Cairo Museum, and the wood works in the El Hakim Mosque reveal the most interesting examples of Islamic wood works.

The magnificent gate displayed in the Metropolitan Museum and the wood works displayed in the Cairo Museum, prove that the Fatimid decorations were oriented towards animal motifs in later periods. These decorations which are thought to be related to native art, include hunting scenes, symmetrical group of birds of animals. This style later influenced the Mameluke art and decorations were enriched with all-over designs. Wery few examples of Persian wood work preceding the Seljuk period have survived until the present day. Some wood inscribed with Cufic writing are found in Tashkent and Samarkand Museums and in private collections. Mongolian wood works of the 13th – 14th centuries are also very rare. Wooden doors with Cufic inscriptions shown great similarities with stone decorations in the architecture of the period.

Seljuks considered wood works very important and they have produced many works of art such as pulpits, reading desks, chests of drawers in addition to the architectural elements ornamenting buildings. Geometrical forms and plant motifs were often used in the Seljuk wood works where carving and latticework were widely applied. The decorations were usually raised and the compositions were completed Rumi style borders. The motifs of peacocks, King Solomon’s seal and cypress trees were largely used in the Seljuk wood works. The pulpits of the Konya Alaaddin Mosque, Manisa Grand Mosque, Birgi Grand Mosque are the most beautiful pieces of the Seljuk wood works in Anatolia. The Seljuk wood work reveals itself on the wooden sarcophagi. The sarcophagus over Mevlana’s grave in the Konya Mevlana Tomb is decorated with embellishments characteristic of the age and is covered all over with lyric poems and couplets.

The Seljuk wood works influenced the early Ottoman wood works of the 14th -15th centuries and various works were started to be made new techniques and with new decorative elements. Besides carving and latticework, dovetail method was widely used and enriched wood works were made also with the addition of auxiliary elements such as mother-of-pearls, tortoise shells and ivory. Floral motifs were often used in addition to Rumi compositions. Beginning with the 16th century, the Rumi decoration on the wood works gained a much more complex appearance uniting with different floral patterns found in the similarly decorated tiles. Although the forms used in the 16th century wood works were continued during the 17th century, new patterns were created in decorations.

The most renowned of these are the floral motifs which have lost their original forms in a tendency of stylisation. Plainness was gradually left and a richer embellishment replaced it.

With materials such as mother-of-pearl, tortoise shell and ivory used in the 18th century wood works, the products gained a more colourful appearance. The influence of the Baroque and Rococo styles to be found in almost every branch of Turkish art, has revealed itself also in the wood works of that century. As an inevitable consequence of this, the Turkish wood works lost its own characteristics and came under the absolute influence of European art.

Production of such hand-printed textiles commences with the application of designs previously drawn on paper to a piece of cloth stretched over a frame. The outlines are first traced using only a brush, and the areas to be colored are then filled in, exactly as if making a painting. Prints of this type are also known as ‘hand-prints’. In the combined technique, the outlines are first printed on the cloth with a wooden mold, and the colors then filled in with a brush. In block-printing both the black outlines and the colored areas are applied to the cloth using appropriate molds.

The predominance of nature manifests itself in the motifs used as in all branches of Turkish art. Motifs such as stylized tulips, carnations, cherries, and pomegranate trees are frequently encountered alongside the occasional stag, horse, cock, sparrow and peacock motif. Istanbul prints exhibit a refinement of taste and feeling and all the beauties of nature in a multiplicity of colors. The primarily symmetrical floral compositions on hand-printed textiles are either dyed separately or in groups. Black, brown and dark red tones predominate on the prints of Tokat. The most salient characteristic of ‘karakalem’ and ‘elvan’ prints which employ the block-printing method is that the design covers the entire surface of the cloth. Apple and cherry designs are the most common on Tokat prints. While the predominance of black is conspicuous on Kastamonu prints with their circular compositions, colorful flowers printed on a black field are a style peculiar to Bartin. Prints from the Gaziantep region meanwhile distinguish themselves both materials used and techniques employed: the design is applied on silk using the techniques of printing and tie-dyeing.

Hand-printed textiles such as head scarves, quilt covers, tablecloths, prayer mats, pillowcases, handkerchiefs, couch covers, napkins, towels, shirts and turbans were some of the highly prized items during Ottoman times. Among them, those still used widely today are the ‘yemeni’ or head scarves, whose names vary from region to region. Elaborately crocheted borders, three-dimensional like lace, are characteristic of such head scarves. As in the art of hand-printing, the most common motifs used for these border decorations are the stylized forms inspired nature. The use on the crocheted borders of the same floral shapes printed on the cloth is a beautiful example of the way these two handicrafts developed hand in hand. The art of block-printing, which constitutes the essence of the advanced technologies later developed for the printing of cloth, is slowly vanishing today. The traditional art of hand-printing cloth, once practiced so intensively in several regions of Anatolia, survives today on a limited scale in Tokat and Kastamonu.