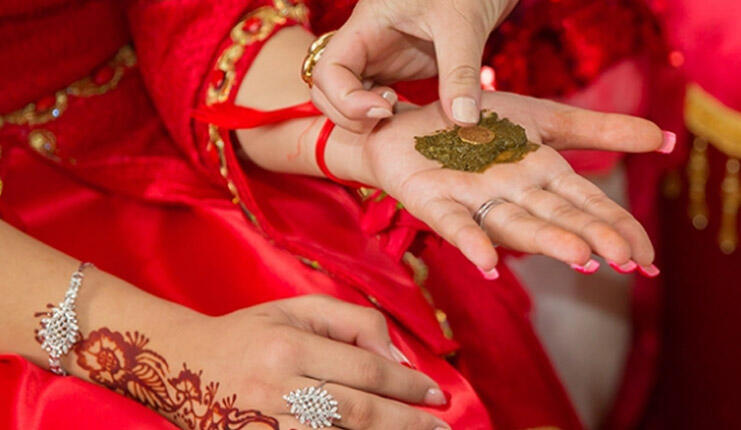 The ceremony held one day before the wedding in the home of bride and groom is called the henna night. It generally takes place at the girl’s home and among women, although either side can elect to host it.

Usually dry henna brought the bridegroom’s family is broken to pieces in a silver or copper vessel a woman whose father and mother alive, not experienced any separation. After preparing the bride, veil ornamented with red flake is placed over her head, and she is brought into the middle with hymn and folk songs about henna.

Henna that has earlier kneaded with water is brought in on a tray surrounded candles and placed in the middle of the room. In some places, the henna is first put on the hands of the bride and then distributed to the guests; in other areas the henna is first distributed to the guests, and only after everybody has left is it placed on the bride’s hands. If the woman so wishes, henna can also be placed on her feet and hair. Considerable attention is paid to charging a woman with a happy marriage, called the “basi bütün” (meaning “whose head is complete”, in a sense, this describes her as someone who has a complete family with husband and children and whose marriage is whole, not separated divorce) to knead and distribute the henna and apply it to the girl’s hand. The woman places the henna on one of the bride’s hands, and a young girl places it on the other.

Before the henna is applied, coins or gold are also placed in her hands. After woman who came together for dying henna leave, close friend of the bride remain with her andenjoy the ceremony before the marriage.

HENNA PARTY
In former times, wedding festivities were drawn-out affairs lasting several days. They began on a Monday with the dispatch of the bridal trousseau to the bridegroom’s house. The procession carrying the trousseau was proceeded large wooden or iron “trees” decorated with cloths, fruits, and flowers. The bridal bath was held the following day (Tuesday) while Wednesday evening was when a henna~party was held in the harem section of the house in which the bride-to-be lived. At the same time, the menfolk would be enjoying themselves in the men’s quarters (selamlık) of same house or in that of the groom’s.

A henna party was an occasion on which the bride, young girls, and the womenfolk of her future husband dressed up in the sumptuous, heavilyembroidered dresses called bindalli. The bride’s face would be concealed a sequined red veil. The henna for the party would be brought to the bride’s house on a silver tray with two burning candles a few of the groom’s relatives. After all the guests were assembled, the bride’s future mother-in-law would roll out like a carpet before her a bolt of silk cloth that she had brought with her as a gift. The bride and her friends, carrying lit candles, would approach the guests while coins would be scattered over the bride’s head as symbols of fertility. The bride would walk along the unrolled bolt of silk cloth towards her future mother-in-law (this often was the first occasion on which they met), take the woman’s hand, and kiss it respectfully. Trays of fruits and nuts, pastries, and marzipan would now appear. Songs and ditties reserved only for henna-parties would now be sung in an attempt to make the prospective bride cry. (Her crying was believed to bring good luck.) Next the bride would be made to sit on a cushion and her mother-in-law would place a gold coin in the palm of her hand. This gold coin was believed to be a symbol of good luck and abundance. Now a woman who was known to have a happy marriage had the job of tinging the palms, fingertips, and big toes of the bride with henna. The bride’s unmarried friends would also tinge their hands with henna in the belief that this would enable them to get married soon.