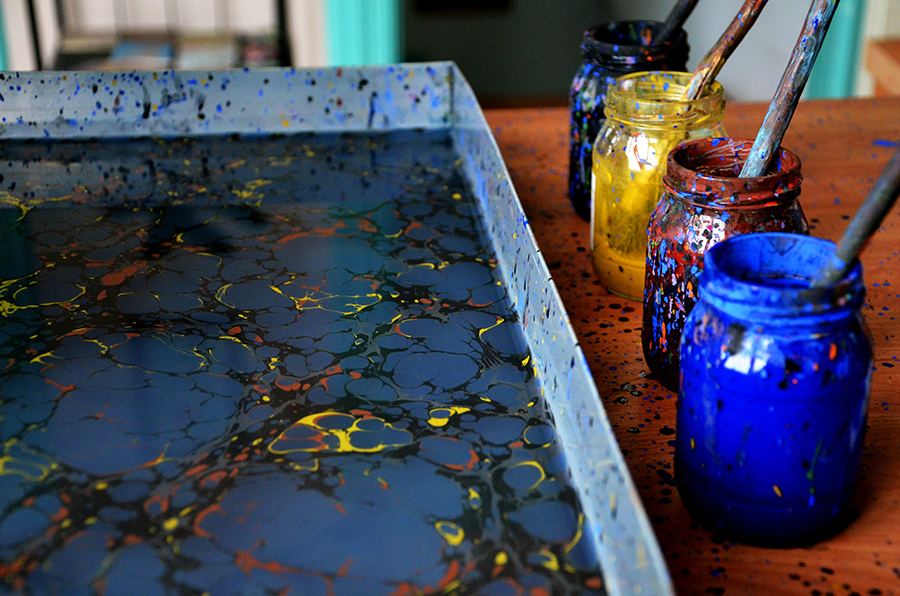 Gum Tragacant is obtained from trunk of a thorny plant growing naturally in Anatolian, Persian and Turkestan mountians and called “gaven”. The sap coming out of scratches made on the branches dries up later and solidifies in bone white colored pieces. It is dropped in water with very low hardness at the rate of 20-40 grams/3 litres and kept for two days.The gum having dissolved completely is filtered through a cloth bag and poured into the basin. It should have a dentisty of buttermilk.Gum tragacanth is widely used as herbal medicene(in throat and stomach diseases) in cosmetic and textile industry.

Dye are “mineral dyes” as it is called in clasiccal method obtained from natural metal oxides. Turkish is a very rich country in respect of such natural dyes.Any kind of earth may be first translated into mud then filtered and crushed to from a dye.

Painthbrushes; are made of horsehair bound around a rosetree stick, in a manner to from a circumference with hollow centre.Rosetree is preferred because it prevents mould. Brushes of different thickness and length enable dye application and dye control.

Basin is made of wood or metal of 4-6 cm. depth an about some milimeter larger than the paper size (to offset the dilatation of paper when wet). Usual paper zizes are 35X50 cm. or 25X35 cm.

Water; preferably withouth hardness.The ideal is distilled water. In older times rainwater was favorite but because of acide rain in our times it is no longer advisable.

Paper: The ideal paper is the one handmade and having a high absorbtion capacity and acid-free. On account of its rarity and high cost we don’t advise it to begginers. Instead, any kind of non glossy paper may be used. In order to increasethe absorbtion capaticy and to fix the dye on it(more durable) and alumina solution may be applied on the paper surface. Thus  dyes are made more easy to fix.

Gall: The most importent metarial to make marbling. A marbler must well understand  what gall is and its functions. To my openion the secret of the marbling lies in the gall. Its main functions are :

1. to ensure surface tension, dye spreading over the water surface otherwice dyes sink.
2. to prevent mixture of dyes. For instance when blue yellow are simultaneously applied and mixed up as much as possible never green comes out.
3. to assist dye fixation on the paper.
4. to give different shades of the same color and different size of patterns.

1- Battal – Stone: The oldest recorded style in Ebru. It is the base of all forms in paper marbling art. The paints stay as they drop off the brush no other effect is given.

2- Gel Git – Tidal : After having a battal base, it is formed zigzag movements parallel to the sides of the basin. This tidal movement is sometimes applied diagonally as well.

3- Şal – Shawl : Formed an evenly spreading of two or three ‘S’ shapes on a tidal ebru in the opposite direction of the last tidal move.

4- Bülbül Yuvası – Nightingale Nest : Formed inside to outside spiral movements next to each other on a battal ebru.

5- Taraklı – Combed : A vertically made tidal ebru is combed in the opposite direction of the last tidal movement.

7- Hafif – Light : Paints are diluted more than in other ebru types. Light ebru is usually used as a base to perform calligraphy.

8- Hatip – Orator : Motifs are formed giving movement effects to the paints that are distributed evenly within each other on the surface. Colors at the background are light, motif colors are intense.

9- Dalgalı – Wavy : When the paper is moved back and forth during the marbling, the result will appear as waves on the paper. The paper can be folded, (creases point the surface) when each move contacts with a crease it will change direction and will form the waves on the paper. Waves can be formed only if the movement has a regular rhythm.

10- Neftli Battal –Turpentine: This is obtained sprinkling paints with some added drops of Turpentine (preferably pine turpentine) onto a ‘Battal’ background. It gives a wavy appearance.

11- Somaki Battal – Porphyry: Generally made with two color. More gall is added to the second color, which squeezes the first color and creates thin veins, like marble.

12 – Serpmeli Battal – Sprayed: After any well known “Battal marbling” is made, a second color, in contrast to the background, is sprinkled is small droplets. The paint in the brush is squeezes out carefully, and some people use a special brush for sprinkling. This sprinkling may be formed in ‘Gel-Git’ – ‘ Bülbül Yuvası’ or other patterns.

13- Ak Kase – Stenciled Marbling: This is a pattern obtained making several imprints on the same background, and popular with calligraphers. The base consist of a ‘light marbling upon which the script is written using a special fluid prepared with gum Arabic applied with a red pen or brush. Thus the surface of the light marbling is covered (insulated) the gum Arabic. After drying, another design using darker colors is applied on the same paper: the parts covered with gum Arabic will resist the second coat and will therefore display the script. The same technique may be applied using a stencil, and other substances can be used instead of gum Arabic, for example heavy gum tragacanth, silicone, several transparent glues etc.

1- Fantazi – Fantasy 2- Kedi Gözü – Cat Eye 3- Dalgalı – Waved C- Flowered Ebru;Forms of flower motifs are applied on battal ebru. Application process is quite different from oil painting. Ebru master has to form the flowers and get the image on paper rapidly, before the paints on the water start cracking. Therefore this art should not be compared with the art of painting. 1- Lale – Tulip 2- Karanfil – Carnation 3- Sümbül – Hyacinth 4- Demet Çiçek – Flower bunch 5- Renkli Menekşeler – Multicolored violet 6- Papatya – Camomile / Daisy 7- Gelincik – Poppy 8- Gül – Rose 9- Buket – Bouquet • All these different types of Ebru have their own combinations of dyes, drawing techniques and have different levels of difficulty in preparation and different methods, in general, but the equipment used is almost the same for many of these types. Through practice and passion, candidates can learn all of them and enjoy the perfection of this beautiful art.

Marbling is similar to cooking; it is impossible to give the exact recipe. Everyone has his own mixture of colors and patterns and wishes to reflect to own world.

Marbling results the simultaneous operation of many accurate balances. Purity and application rules must be streaktly observed. The density of the gummed water and the relationships between the water and the dye, the dye and the tensioning agent (gall), the quantity of gall in the dye are all very important. It may take some time to establish such a delicate balance. But was everything is ready marbling is easily and quickly performed. Yet this property of the marbling makes it very suitable for a “theraphy”.

Dyes are spopotted on the surface of the water means of paintbrushes and according to quantities and colors desired. Dyes should not be too concentrated. Concentric, superposed drops thus applied form a pattern called “Battal”. This pattern is the origin of almost all others. Now if this basic pattern is handled parellel lines made a thin pencil or chip moved back and forth you obtain “the back-and-forth”. If this design is crossed out means of a comb a “combed-pattern” is obtained. In case the “back-and-forth” is diagonally crossed again, it becomes “shawl” sample. Combed marbling may be made into back-and-forth or shawl design. When a convolute line is applied from the outer circumference towards the centre you obtain a “nightingale nest”. In the event small colorfull dots are spotted on the back-and-forth or shawl design you get the “sprinkled marbling”. If, instead, you apply larger dots (which means with higher rate of gall contents) you obtain the “prophyry marble” which resemble most to marble.

Nonetheless above patterns may be divesified selecting one of the above as a basis and making concentric drops of different colors. Mehmet Efendi (the orator of Saint Sophia, deceased in 1973) first formed flower and other patterns, wich were subsequenly called the “Orator pattern” (Hatip ebrusu). Later on these patterns developed into flower shaped marblings.

The sheet of paper is lard from one side onto any of above designs prepared on the gummed water in the basin. Now this processing makes the dye fixed on the paper. The paper is then careflly lifted off the basin without stripping too much the gum off the surface. In classic Turkish marbling the paper taken out of the basin is not washed off. The thin layer of gum remaining on the surface forms a protective (fixing) coat. The paper is laid on a flat surface and let to dry up.

Presuming every material is made ready, the translation of the patterns made on the surface water is accomplisheed within 3-5 minutes or at most, 15 minutes. This infinity of colors and shapes quickly formed makes the marbling amazing at  and fascinates the spectator (if any). It makes eveything forgotten. One evening the late calligraphy and marbling master, Necmetting Okyay started to make marbling.Some time later he heard a sound coming from the street and supposed that it was the voice of a street seller making business late in the night: to his surprise this was the müezzin performing the morning player call.